I couldn’t drive without an adult. There was a boy on whom I was “crunching” (a hip word my “chassies” and I used so we could be SO original) and I doodled our names together in my notebooks. I scribbled my favorite song lyrics onto the margins of EVERYTHING and started playing guitar (the first song I learned to play was this)

The dawn of reality TV was upon us.

MTV (a channel I tried to never let my mom see me watch) aired a show called Making the Band. The product of the first season was the totally dreamy band known as O-Town. 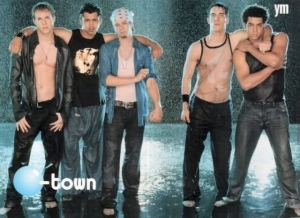 Totally had this poster. Aren't they dreamy?

A bit of a one hit wonder, O-Town’s life was a flash in the pan as far as music history is concerned. On the map of my adolescent life they weren’t as influential as some other boy band groups. They were, however, oh so cute! I diligently read the interviews of all the bands in hopes that someday, somehow, if I had the chance to talk to them I’d say something clever about something they liked and we would fall MADLY in love.

Sixteen year old me had her priorities all figured out.

I went out to dinner with my husband at a charming restaurant straight after work. Work yesterday consisted of ten hours of two kids with head colds and ear infections. I was a walking used tissue. 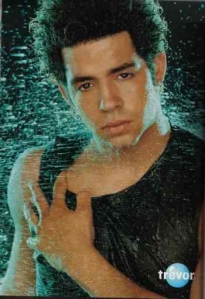 16 year old me stared at this picture. A lot.

And there he was.  TREVOR.  The second weirdest part was he wasn’t a guest at the restaurant, he was a server. The first weirdest part was that my husband spotted him and knew his name before I did (I am so lucky to be married to a man who understands the teenage girl inside of me).

My husband also flagged him down and he came over to our table, talked to us, and shook my hand TWICE (if it wasn’t for my constant need of hand washing in my job – I would have never washed my hand). Sixteen year old me had a script for this moment. Twenty five year old me did not. Instead, twenty five year old me told him that I had his poster and giggled a little. Basically I became less socially capable than my teenage self in an unexpected star encounter.

I think this is because at some point we stop thinking that these kind of chance encounters ever happen. I have had, however, two such encounters with quasi-celebrities now. Both times have made me every bit an awkward sunflower. So maybe third time is the charm. Maybe these past two encounters have just been warm ups for the bigger leagues. Maybe I should take these blunders as blessings and just part of the learning curve.

Needless the say: I have already started practicing my speeches for Christian Bale, Johnny Depp, and Hugh Jackman.

← Make People Believe You Are From LA
Slow Down, You Crazy Child →