Just Dying To Be Here 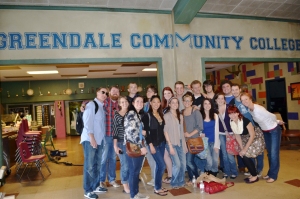 Just stopping by for some lunch at my favorite cafeteria.

Birthdays are weird and I feel weird celebrating them. Statistically I still have a good sixty years to go. I don’t feel like I need a great deal of praise for not beating the odds. In reality I did very little to get myself born. My initial getting here was up to my parents, mostly my mom, so I feel strange taking credit. As for staying alive each year, it just kind of happened. I put at least the first eleven years entirely on my parents (thanks mom and dad!). Years twelve  through seventeen I’d say my survival was a team effort  between the folks and I. After eighteen – I take sole responsibility.

So that makes eight years that I independently haven’t managed to die or be killed. I’m a second grader at staying alive. This isn’t flippant. I don’t take life for granted. I’ve seen too many die young to not be thankful for each day I have been given.

It’s just that birthdays seem like a lot of pressure.

Now I’m as egocentric as the next girl, but birthdays overwhelm me. I feel like people around me are stressed about making sure I have an especially nice day, which is really nice of them, but their stress becomes my stress. These are people I care about! I don’t want to let them down by having a crummy day! I’ve even been known to create pleasantries to tell people later when they ask: “Did you do anything special on your birthday?”. Because when I tell them I worked all day, or moved to a new apartment, they get all squirmy and weird. Just tell me ‘happy birthday’ and I will be content. I’m generally a very happy person, so I can 90% guarantee that I will have a happy day.

So to revel in the weirdness – I am going to play “Birthday Psychic” and try to predict the gifts that I will receive this year.

2.) Lady clothes with cats on them

3.) 20th Anniversary Edition of Newsies on DVD and Blu-Ray

5.) Something made out of a tissue box

8.) A framed pictures of Tom Welling

10.) Papa Smurf (aka The Creepiest Smurf)

I’ll check in later and let you know how these predictions pan out.

← Caveats
Give Them Everything →